Here at Total Balance Healthcare, we see a lot of patients who present to us with tendon pain. This has been very common especially lately, with lots of people returning to playing team/competitive sport and also with a lot of people trying out new forms of physical activity. We are very lucky at our clinic to have a shockwave machine, which we use very regularly particularly with patient’s suffering with tendon pain. Here is a blog on how shockwave therapy works and also a story from one of our patients here at the clinic.

What is Shockwave therapy? 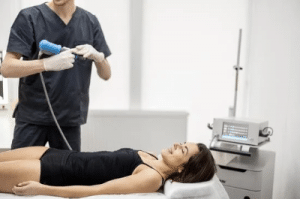 Shockwave Therapy is a non-invasive form of treatment, which uses a special machine to send high intensity sound waves into the body to interact with the body’s tissues. Initially used to help treat kidney stones in urology, it has since been found to help with a lot of musculoskeletal injuries, most predominantly in the treatment of tendons.

What to expect from shockwave therapy?

First of all shockwave therapy is not necessarily always very pleasant or relaxing especially in the initial phases of treatment. If I were a salesman, I probably wouldn’t open with that line. However, I am an osteopath and knowing what to expect from treatment is very important. The good news is that whilst it can be initially uncomfortable, we can modify the strength of the shocks so that the intensity begins quite low and then increase it as we go. Your sensitivity to the shocks will also decrease as we perform the treatment.

A shockwave treatment usually goes for about 15 minutes in total. Often you will feel some pain relief after just the one session, however at least 4-5 sessions are typically recommended and usually best results are found if the sessions are in close proximity of each other. Usually we would try to fit the 4-5 sessions all within two weeks and then potentially a few follow up treatments after that spaced roughly a week apart. This is only a guide and each individual is different and how well you respond to treatment will alter the session frequency.

How does shockwave therapy work?

James is one of the osteopaths here at the Total Balance Healthcare clinic. James’ mum has had a pretty long history of hip pain throughout her life. She has had surgery for a labral tear in her right hip (See photo for reference of what a labral tear is). The labrum in the hip, is a cup shaped rim of cartilage whic 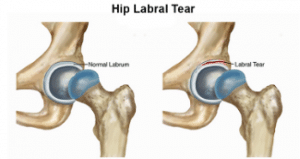 h lines and reinforces the hip socket. We also have a labrum in our shoulder which does a very similar thing as what it does in the hip.

Although Tara has had this repaired in the past, on her recent MRI which was performed in 2022, it shows that she again has a labral tear in her hip. Additionally on this MRI, it also showed that she has a gluteal tendinopathy. A gluteal tendinopathy is when the glute tendon which attaches into the side of the hip, becomes inflamed and irritated. (See the next photo for a reference of what this is). 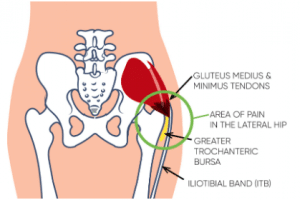 When Tara presented to the Total Balance Healthcare clinic her symptoms seemed to be coming a lot more from her gluteal tendinopathy as opposed to the labral tear in her hip. Tara was experiencing pain on the outside of her hip, which at times was sending pain, numbness and tingling all the way down to her toes. She was also experiencing difficulty and weakness with hip abduction which is a key finding in people with a gluteal tendinopathy or tear.

SO, how did we treat Tara’s hip?

Initially what we did was some hands on osteopathic treatment. This included some deep tissue massage to essentially the entire lower limb, we also did some joint articulations, making sure to avoid stretching the tendon as tendinopathies typically do not like to be stretched. We also got Tara to do some at-home rehabilitation exercises to help strengthen the entire hip complex and specifically target the gluteal tendon (which Tara admits she was not doing anywhere near frequently enough). In my opinion, rehabilitation exercises are by far the most important aspect of injury management in most musculoskeletal conditions especially in patients who have tendinopathies.

Despite the osteopathic treatment and the sporadic and inconsistent attempt at performing her exercises, Tara’s symptoms never really got much better. She would have some days where her hip was feeling okay and like it was on the mend, but other days where she felt like she essentially had no power or strength at all. This is where the use of shockwave therapy came in…….

First session: When we first used the shockwave machine on Tara’s hip, we set the machine to a really low shock strength. Her initial response to treatment? Wow that really hurts!! This sensation lasted for about 10-15 seconds before it eventually settled down a little bit and she was able to manage it a little bit better. The entire first session was still quite uncomfortable however she was able to cope with the pain and reported that her hip was feeling at least 50% better after the treatment was done. She left the treatment room feeling really excited about her follow up appointments and with some optimism that this form of therapy may really work for her. 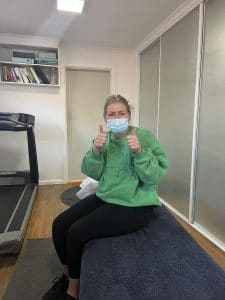 Second session: When Tara began her second session she was again a little bit apprehensive about the uncomfortability of the treatment that she was about to get, however this time she knew exactly what to expect. She also knew that her initial treatment was not as painful as she had previously thought prior to the session so she knew that she would be able to get through another session of it. This time we started on the same low level strength and she could feel the shocks, but there was no pain sensation at all (a positive sign that things were improving). We therefore increased the intensity of the shocks which again caused Tara some discomfort, but was much more manageable this time. At the end of the session, she again reported much less pain and also felt surprisingly to her, much more strength in her hip. The shockwave machine would not have made her muscles physically any bigger or stronger however she likely had a perceived increase in strength due to the reduced pain levels.

Third Session: When beginning this session, Tara reported feeling almost no pain at all in her hip. This was a very positive sign that shockwave therapy had been improving her pain levels. As a result of her not being in too much pain, she has also been able to focus a lot more on her rehabilitation exercises which would also be complimenting her recovery. For this session we started the shockwave machine at near full intensity, and she reported some mild discomfort initially. By the end of the session, she could feel the shocks, but there was no pain associated with the treatment and her hip had no pain at all after the treatment.

A huge focus for Tara now is doing her rehabilitation exercises every single day which are significantly helping her to maintain and improve her current condition. If she were to stop doing these specific rehabilitation exercises, the likelihood that her gluteal tendinopathy would return would be significant. She will also typically book in for some shockwave treatment every week or fortnight. This is not something that is always necessary, however she finds that it works well for her and that it also keeps her accountable with her exercises and keeping her pain levels to an absolute minimum. After attempting almost all other forms of treatment, including osteopathic hands on treatment, swimming, walking, pilates and a multiplitude of other therapies, Tara found that shockwave therapy was by the most successful and when combining this with specific rehabilitation exercises, she has been able to get back into doing the activities that she loves.

Looking to Make an Appointment or Shop Online?

Booking Online is the most convenient way to lock in the clinician & time you want. We also have an Online Store with an amazing range of Osteo & Naturopathy Products.